Last week I had Laser Crown Lengthening done by Craig Spodak at Spodak Dental in Delray Beach. I’m so happy with the results even though it was only the first small step in a multi-step process.

My Teeth have always bothered me. I think I had all my adult teeth by 7 years old and around that time I fell off a bike and chipped my front tooth pretty badly. I had it bonded and forgot about it until I was around 18. Bonding discolors over time and mine was starting to become very dark. The dentist who did my bonding at 18 made the shape very ugly, I had a small gap between my front and next tooth and she tried to fill it by making my front tooth bell out. I was SUPER unhappy. I had it redone, then the shape was fine but the color was not right. There were a few replacements like this, either the shape or color was wrong for the last 10 years.

Eventually, I was told that to make them how I wanted them, I would need veneers. I have always been against veneers. I don’t judge anyone who has them, but for me, it just sounded terrifying. Grinding down your teeth into nubs and what if the veneer falls off? I had seen what they look like if they fall off and it’s not a good look.

Besides the bonding, I have a “gummy smile” which ALWAYS bothered me. My whole family has perfectly straight, big beautiful teeth and I got these little square crooked teeth. It seemed so unfair! Most people told me they didn’t notice my gums. Maybe because I trained myself to smile smaller. To keep my lip down and to not laugh or smile too hard. I even went through a phase where I covered my mouth when I would smile or laugh. Once, I was featured on a gossip site and it said,

“This girl has no style, no class and gums you notice from across the room”

Like OUCH! The line about my style and class didn’t phase me at all because I know that’s just not true, but the gums line definitely hit me hard. I went for a consultation at a periodontist the next week. He told me that I wasn’t a candidate for gingivectomy (shaving my gums up either with a laser or scalpel.) He said that I would have to have surgery to ensure they don’t grow back, that the recovery would be brutal and on top of that, it would cost $3,600. So that was a no for me.

My next move was to try botox. I had heard that you could use it to relax the muscles you use to smile. This would allow you to smile without your upper lip receding back high enough to show your gums. I decided to try it. Botox worked and I loved it but it only lasted a few weeks and made talking and eating kind of a challenge.

After trying all this I began to talk about my issues with my smile on my Instagram stories. I was fed up with photoshopping my bonding white and nixing a photo because too much of my gums showed. My now current dentist Dr. Craig Spodak saw my stories and suggested I come in for a consultation. I was pretty sure I’d be told I have to get veneers which I was finally starting to accept. Instead, though, he told me he could fix the bonding, laser my gums, and we could do Invisalign to complete the overall appearance of my smile. He said my teeth are starting to point outward witch not only isn’t aesthetically pleasing but it also makes them look shorter. Therefore, straightening them out will also help them to look longer and bigger as well as be healthier because they won’t wear on one another.

We agreed to work together on this and move forward on the first step! (Obviously) The lasering process was painless. I was numbed up with a topical gel for a few minutes and then with a shot which I didn’t feel. I was given glasses to protect my eyes and a mirror to be able to hold up and check progress. (not while the lasering was taking place.) Once he lasered a little I held up the mirror and checked! Millimeters have never made such a difference. We continued until the front two were done, the second on the right and the third on the left (your view) were done.

Truly, just evening out my tooth line and creating more of an arch on top has improved my smile so much. I feel like the photos don’t really show the real transformation because I’m so used to smiling small that you can’t see how much of my gums would have shown if I’d have smiled fully.

I’m so happy with the results of this step and am looking forward to showing you all the entire process. The Invisalign will take about 6 months and I’ll be starting that soon! (He may want to redo the bonding after Invisalign too but we’ll see.) I like that Dr. Craig Spodak does a little at a time and tries his best to keep the natural teeth. I like my teeth (if the front wasn’t chipped ) and I want to look like me, not like a whole new person. I’m really happy I get to keep my natural teeth, look like me, but just improved. Dr. Spodak says he likes to do as minimal dentistry as possible to achieve the desired effect. Not only is this good for your teeth, but it’s good for your wallet.

See below for before and after images.

Top: Before any work
Bottom: After crown lengthening. 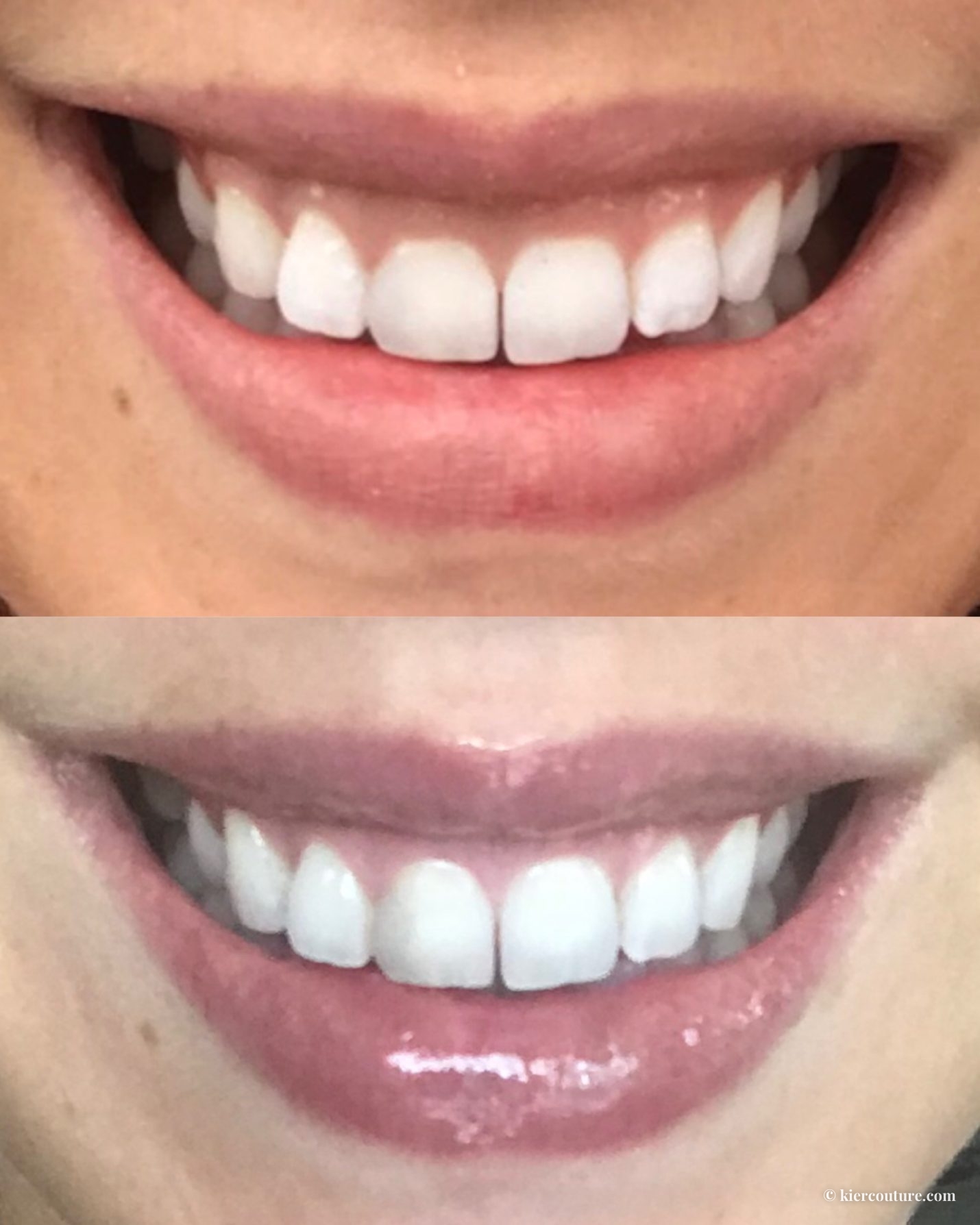 I had my bonding redone last week. I still see a dark area but that is because of a combination of my teeth between shades as well as the positioning of my other tooth causing a shadow. After Invisalign, we will be able to reevaluate and fix again or consider doing porcelain veneers on the two front teeth. Make sure you follow along on Instagram Stories to see my progress with Invisalign.

Top: Before any work
Bottom: After crown lengthening and bonding. 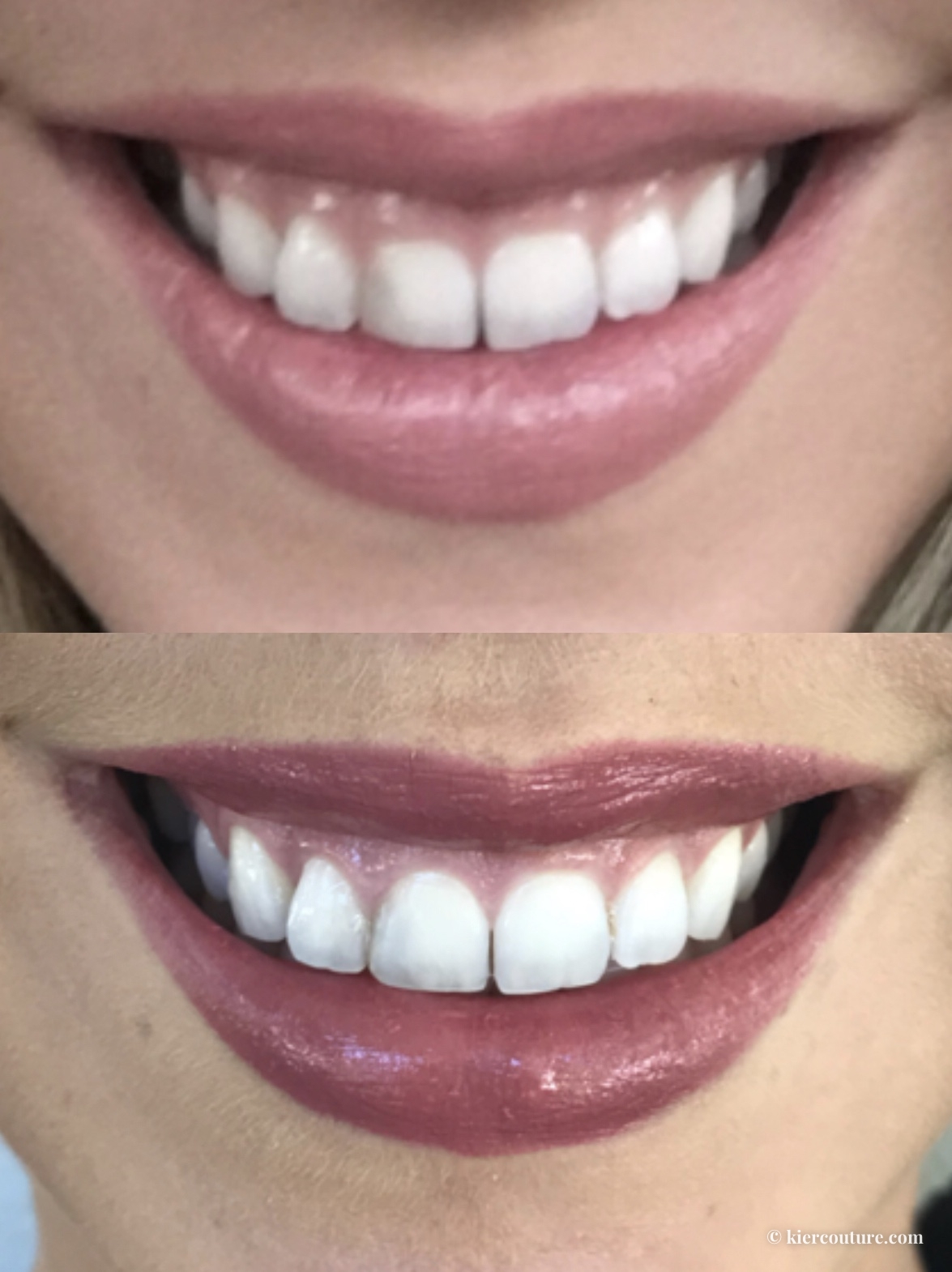